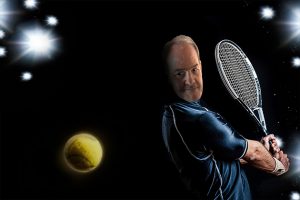 I am otherwise a fine example of the red-blooded American male, but I’m not a big sports fan. I love hardware stores, blithely mix stripes and plaids, and I’m pretty sure buffalo wild wings are cuisine of the hautest, but sports leave me cold. In fact, I couldn’t tell you the difference between soccer and bocce, except I’m pretty sure soccer’s on the widescreen at my neighborhood Argentinian restaurant when riots break out among the regulars.

But I am a sports fan for two weeks a year, when I am positively enthralled by the U.S. Open. (For the record, I’m not sure red-blooded American males typically use the word “enthralled.” Could it be that I’m a closet metrosexual?)

Actually, it turns out that there are two U.S. Opens. I’m not talking about the one where gaudily-attired men chase after little white balls with long sticks. I’m talking about the one where gaudily-attired men chase slightly larger fuzzy yellow balls with giant fly-swatters. The objective of one seems to be to put the little white ball in a series of holes in the ground, but the one that charms me involves swatting the slightly larger fuzzy yellow balls over a net. It’s called “tennis.” Perhaps you’ve heard of it. (For the record, I’m not sure red-blooded American males typically use the word “charmed,” either. I’m starting to get worried.)

Anyway, the U.S. Open tennis championships take place every year around Labor Day. My wife and I watch it together, which means for two weeks a year we have something to talk about other than the relative merits of restaurants serving buffalo wild wings.

It would appear, however, that my sport has fallen on hard times. For years the early rounds aired on the USA Network and the finals on CBS, but this year the whole thing was bumped down to ESPN 2. Not even ESPN 1, for God’s sake.

In the past, we’d have commentators like John McEnroe, his brother Patrick, Jim Courier and other red-blooded American males. This year the McEnroes showed up for some of the big games, but mostly the commentating was done by strange-looking men with funny accents, and somebody named Hannah Storm, who is apparently an ESPN regular who, I gather, lives under a big desk in the ESPN studio and pops out on command to commentate on whatever sport is playing at the time.

There is also someone named Brad Gilbert, a former tennis coach who shows up randomly during the broadcasts. “BG,” as he is tolerantly called, reminds me of that crazy uncle who shows up randomly at family gatherings, spews incomprehensible stream-of-consciousness monologues to no one in particular, and never leaves. In addition to his general creepy-uncle quality, Mr. Gilbert comes up with annoying nicknames for all the players — which saves him from learning to pronounce all the distinctly non-red-blooded American names of the players nowadays.

Since, as we’ve already established, I’m not a big sports fan, this was the first time I’d seen ESPN 2. It’s a lot like a community cable channel that runs local high school sports, but the cable channel has better talent, production, and commercials.

Speaking of commercials, I don’t think ESPN 2 gets a lot of money for theirs. To be sure, the advertisers are all prime examples of corporate citizenship — Chase Bank, Mercedes, et. al. — but I don’t think they spend a lot of money on their ads. In fact, judging from what they throw on the screen, their ad budgets probably consist of the change they find in their waiting-room couches.

Case in point: the Mercedes commercials, which seem to have been written by the junior copywriter’s younger brother. Like the cherry atop a badly-written sundae, the Mercedes tag-line says it all: “The Best, or Nothing.” It sounds like Mercedes will throw a major temper tantrum if anyone challenges that “The Best” part. (“Okay, okay, we’ll let you win. Just stop screaming.”)

And then there was the tournament itself. The few red-blooded American players dropped like flies. Players with unpronounceable names won, lost, retired, went home or stayed home. I have no idea who won. Which is fine, because I couldn’t pronounce their names anyway.

Maybe Brad Gilbert isn’t so crazy after all.