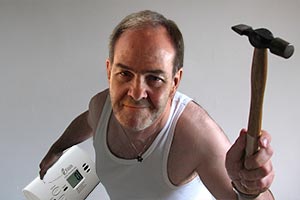 All these years we thought it merely coincidence that all of the low-battery alarms shrieked by all of the bad-stuff detectors in our homes seem to go off in the middle of the night.

So there I am, resting comfortably, when I start hearing a raspy chirp. The time is 2:47 AM. But I can’t tell from which direction the chirp is coming.

If I were that Taiwanese electronics whiz, I would design the little chirping sound to make it completely impossible to determine from which direction it is coming — bringing America to its knees, one chirp at a time.

Knowing that my dog is about to go crazy and my wife is about to wake up – my wife tends to make less noise than the dog, but believe me, you don’t want either of them conscious at a time like this – I go on the Great Chirp Hunt, searching high and low, edging up as close as I can get to each alarm to see if I can determine the culprit. Being a little physically impaired, all the while I am praying fervently that the chirping is coming from one of the CO2 detectors, which are conveniently plugged into baseboard outlets, and therefore accessible without a ladder. If a ladder is involved, my wife is involved; if that’s the case, I might as well just stick  the alarm in her ear.

The Alarm Gods must’ve been looking upon me favorably, because it turns out that the downstairs CO2 detector was in fact the miscreant. But, as it turns out, merely identifying the miscreant is less than half the battle.

Once I found the errant device, I unplugged it, at which point the occasional chirp became a constant screech.

It occurs to me that, if I were that Taiwanese geek, I would design the screech to be as loud and harmful as possible, resulting in catastrophic hearing loss every time a battery needs to be replaced — bringing America to its knees, one ear at a time.

Being the Big Brain that I am, I figured out that if I could ditch the battery altogether, the damn screeching would stop. Foiled again: the battery compartment was secured with a screw the design of which I’d never seen before, and I certainly didn’t have a tool that would fit. 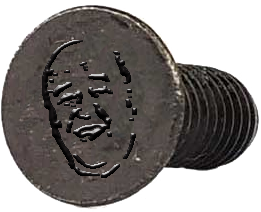 It occurs to me that if I designed battery compartments for that Taiwanese manufacturer, I would want to make it as impossible as possible to get the damn thing open, by using the rarest and most obscure screw head in the world. (After doing a little Googling – and remember, the screeching continued – I found out that the screw head they used was the “Mertz,” patterned after the face of the beloved I Love Lucy character.)

But I digress. So here I am, staring down at the face of Fred Mertz in bas relief, alarm screeching away, mere feet from sleeping dog and wife. (You should know this about the houses in Southern California: they may be small – ours is maybe 100 square feet – but they are separated from one another by several inches.)

Several minutes later, using a combination of garden tools and kitchen implements, I was able to dislodge the screw, open the compartment, and extract the battery. The screeching stopped, with neither the wife or the dog the worse for wear. My work for the evening finished, I retired once again to the comfort and safety of the connubial bed — blissfully ignorant of the undetected CO2 flooding our home.

Of course, if I were anybody in Taiwan, I would arrange for some spurious CO2 to seep into the house while our defenses are down — bringing America to its knees, one deaf homeowner at a time.

Assault on Battery by Jay Mitchell is licensed under a Creative Commons Attribution-NoDerivatives 4.0 International License.