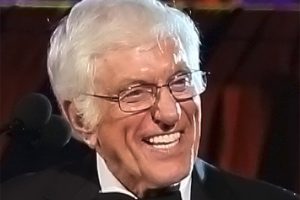 I just got the latest brochure from what passes for culture in Orange County, the Cerritos Center for the Performing Arts, and the more things change, the more they stay the same.

The upcoming season comprises a combination of acts that appeal to old people, acts you’d expect to find in small-town high-school auditoriums, and acts for really old people.

To wit: They have a bunch of events in the category of “Great Performers,” and a couple of events tagged “Memory Lane.” In the former category, we have such luminaries as Dick Van Dyke, who is breaking with his long-standing tradition of employing his kids in his projects – because they are all too old. Mr. Van Dyke, meanwhile, is still going strong at age 90-plus, not because he has a heap of alimony payments or IRS debt, but because he wants to, God bless him.

In the “Memory Lane” category we find just two performances – a “Rockin’ New Year’s Eve” featuring a bunch of oldies acts from the Fifties, and an evening with Frankie Avalon. When the schedule came out, I’m sure Mr. Avalon was deeply hurt by not being included in the “Great Performer” category, but at age 75, he was too young.

The Math Department here at Worldwide Headquarters computed the average age of the “Great Performerss” and found it to be 79.9 years. I’m not disputing that these performers have earned their “Great” moniker, but their appeal is certainly not to people born in this century or even the latter part of the last one.

On the other hand, these people have earned their audiences as long as they are capable and willing to perform. The last time we went to the Cerritos Center, we saw Dave Brubeck just months before his death at the age of 92. He was so fragile that he needed help mounting the stairs to the stage, but once he got behind the piano, the years fell away and he Took Five like it was 1959 all over again.

If you are old enough to remember the heydays of the likes of Sophia Loren, Vicki Carr, Paul Anka, et. al., grab your tickets while you can – these events always sell out quickly. (And come early to the concert – the handicapped parking spaces fill up just as fast.)

But please, not.Engelbert Humperdinck. We have to draw the line somewhere.

Culture Takes a Nap by Jay Mitchell is licensed under a Creative Commons Attribution-NoDerivatives 4.0 International License.