Well, many droplets have passed under the bridge since my last posting about health. As I threatened, I did go see the neurosurgeon, who turned out to be a rock star — very bright, very competent, with a good sense of humor, even. What’s more, he’s got that kind of slightly-worn daytime-drama look that says, “I could play one on TV.” The good Dr. explained in great detail what the procedures — that’s right, two of them — entailed … way TMI, IMHO. (Ask a teenage friend what those initials mean).

For one thing, the first procedure involves a drill and some clamps. I’ve been in sales pretty much all my life, and if there were ever a time when “benefits” should take precedence over “features,” this would be it. I would much rather hear something like, “In a few short months, you’ll regain full use of the right side of your body,” than, “We’re going to drill holes in your brain and you’ll be fully conscious during the whole thing.”

At one point I asked 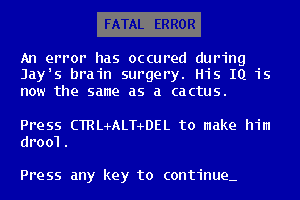 the good Dr. how much of this was done by computer; he told me most of it. I told him that would be okay as long as they weren’t using Windows as an operating system; the last thing you want is a Blue Screen of Death in the middle of the procedure. He laughed (evidence of his good sense of humor) and told me they use Linux. (Ask a teenage geek friend why that’s a good thing.)

After a couple of quick tests, I left the doctor’s office filled with a sense of bonhomie and qu’est-ce que. (Ask a teenage French friend what those words mean.) Not to mention appointments for the surgeries. As I write this, with the surgeries several weeks away, I am sure I made the right decision. I am also sure that when the surgeries are only days away, I won’t be so sure.