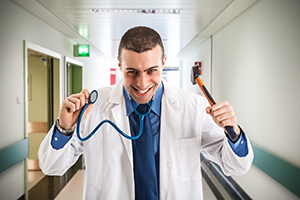 Never mind that several months have transpired since my first (and heretofore only) post about my health. As far as this blog topic goes, this is indeed the second day. I don’t write more about this because, primarily, I don’t think of myself as “Parkinson’s patient,” any more than you’re likely to think of yourself as “one testicle bigger than the other.”

But since this is to be an all-encompassing blog, I feel duty-bound to report in on my progress. As Parkinson’s is wont to do, it has progressed –  pretty much more of the same. My balance is goofier, my strength is, well, weaker, and my walk is clumsier. Nonetheless, my attitude continues to be good – although I may have to enter rehab for all the Rescue Remedy I’m guzzling – and I’m getting things done.

I have found a kindred spirit in Time Magazine columnist Michael Kinsley, who has written two columns on his condition, the first of which reflects accurately my feelings about all this — namely, things could be worse. I’m fortunate to have an eager-beaver neurologist whose office is five minutes away; he loves me, because (a) I’m reasonably intelligent; (b) I am reasonably upbeat; and (c) I don’t drool very much.

We’ve been fiddling around with the medications, and while they reduce discomfort, they don’t do much for the symptoms. So Dr. Neurologist Guy says that I really need to look into Deep Brain Stimulation (DBS), which is where they implant leads in the brain to stimulate production of the whatsit, the lack of which leads to the symptoms. I have been reticent to do that because (a) I don’t even like electrical lines in the ceiling, much less in my head; and, more to the point, (b) I am the world’s biggest chicken – especially when the doctor tells me I’ll be awake for the operation. (He tells me I’ll be “mildly sedated,” but unless mild sedation involves at least a day’s production of Valium, I’m really not interested.)

Nonetheless, I need to do something, and the documentation on this, um, procedure is maybe more reliable than my friend’s cousin’s friend’s brother who experienced a miraculous recovery by eating a vat of pumpkin seeds a day for two years. As much as I am drawn to more natural, less invasive approaches – though I’d probably stop short of Mr. Farts-Pumpkin-Seeds (his Native American name), I am seriously considering DBS. Once again, Our Man Kinsley is one step ahead: he had the DBS procedure and found it worthwhile; read his article about it. I’m going to see the neurosurgeon this week. I’m also going to see an acupuncturist. (Actually, they’re probably very similar; one just sticks the needle deeper.) I’ll keep you posted. Literally.