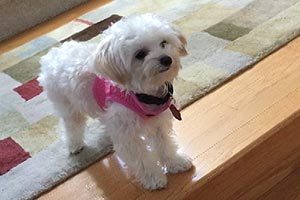 New Kid on the Block

A couple of years ago we lost our ten-year-old Maltese. It was very sad. As any pet lover knows, it’s a feeling akin to losing a child. I mean no disrespect to people who have actual children; I’m sure that when a beloved family animal heads off to that fabled farm upstate, they think, “Well, at least we still have little Rover.” (Those parents got a little confused in the name department; their pet was called “Justin.”)

Anyway, it took us a while to cycle through the stages of grief, which, as I recall, are Crying, Yelling, Blaming, Shaming, Maiming, and Haagen Dazs Binging. But when we were ready, we decided to give rescuing a whirl.

Some friends in San Diego suggested that we contact a woman named Dawn at a sort of halfway house for abandoned animals — Dawn takes the pick of the litters, so to speak, from a local shelter, has a vet check them out and give them shots, cleans them up, and charges more than a shelter but way less than a breeder.

Actually, our first two Malteses were discount doggies of sorts. One was deemed by the breeder to be too ugly to show. (The dog was beautiful, but the breeder could have played the lead in the Freddy Kruger movies.) The other had a Canadian mother, so she wasn’t AKC registered. (But she was terribly polite and she apologized a lot.)

Anyway, we reached out to Dawn, but she didn’t have what we wanted, which turned out to be what everybody wants: female, pure Maltese, under two years old, neither ugly nor Canadian.

But a few weeks later, Dawn called. She said she might have just the ticket. I said forget about the ticket, do you have a dog? Turns out she did — a five-pound female Maltese (pulchritude TBD and nationality unknown). When we told her where we lived, she laughed (not an uncommon reaction, by the way). “I’m delivering another dog in the neighborhood on Christmas morning,” she said.

So at 9 a.m. Christmas morning we met Kai for the first time. (We never discussed it, but Sharon and I both knew this was going be our dog from the moment Dawn first called.) She was a handful (the dog, not Dawn) — lots of puppy energy, endlessly curious, with the ability to stand and walk around on two legs, for a freakishly long time. (The first time we saw her pull that stunt, we were tempted to build her a big tent and send in the clowns.)

It was love at first sight — with the dog, not the name. “Kai” had to go. (Not the dog, the name. Try to keep up.) We played around with various possibilities, and we were torn between “No” and “Down.” In the end, reason prevailed — if you define “reason” as saddling the little princess with the same name as our last two dogs. “Issa” it was.

Fun fact: Issa was the name of the beloved Maltese pet of Publius, the Governor of Malta in the mid-first Century A.D. Fancying himself a poet, Publius wrote,

Issa is more frolicsome than Catulla’s sparrow.
Issa is purer than a dove’s kiss.
Issa is gentler than a maiden.
Issa is more precious than Indian gems.

(Thankfully for Mrs. Publius and all the little Publii, the governor kept his day job.)

Now, a couple of years on, Issa 3 brings us joy every day. She loves to cuddle, play and eat. In fact, to her, everything is either a pillow, a game, or a snack. (I’m all three, apparently.) She even responds to “No,” “Down,” and a bunch of other commands (or, as she would have it, “suggestions.”) But only when a treat is involved. No treat and she could play both leads in Dumb and Dumber 3.

Oh, and it turns out that Issa 3 has a touch of Poodle, manifested by an orange streak down her back. So she’s not 100% Maltese. Who cares? Love is blind.

At least she’s not Canadian.