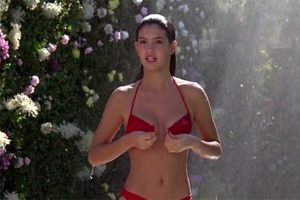 The other day, during one of my all-too-frequent work breaks, it suddenly became absolutely necessary for me to learn what Phoebe Cates was up to these days.

Boys of all ages remember only one thing about Ms. Cates: her classic turn as Linda Barrett in the cult classic Fast Times at Ridgemont High, a performance which turned many a boy into a man, if you catch my drift. But after a string of forgettable follow-up roles, she pretty much dropped out of sight.

But, as it turns out, Ms. Cates may be out of sight, but not out of site: she lives on in hyperspace at www.bluetreeny.com, a New York City Boutique, and has a comfy life with 16-year hubby Kevin Kline.

Those who are accustomed to your correspondent’s drunken-sailor essay construction will not be surprised that this piece has relatively little to do with Phoebe Cates herself. Rather, it has to do with an entire class of people each of whom is, in the words of Mr. Shakespeare, “a poor player that struts and frets his hour upon the stage and then is heard no more.”

Another example is my friend Richard Beymer, he of West Side Story and Twin Peaks fame, who is living a quiet life on a farm in Iowa, making small documentary films for his own amusement featuring the sort of characters who attach themselves to low-wattage ex-personalities. (Kato Kaelin would be the breakout star of that sort.)

Poor Richard doesn’t even have a website, but he does have a MySpace page, which speaks volumes in itself. I mean, seriously, who has a MySpace page? MySpace these days is like the shopping mall whose anchor stores are the Department of Transportation and the U.S. Army Recruiting Station.

Which brings me to the real point of this story: there is a vast class of ex-stars who don’t even qualify for bottom-of-the-barrel reality shows on bottom-of-the-barrel cable networks. When they were casting “I’m a Celebrity, Get Me Out of Here,” I am pretty sure the names Phoebe Cates or Richard Beymer – or Kato Kaelin, for that matter – never came up.

Sure, these people probably have fulfilling lives and are happy in their anonymity, but they’re not doing anything for you or me. And, having plunked down my five bucks for a ticket to Fast Times or West Side Story, I don’t consider the debt to be discharged.

So I am launching a cable channel for the Cateses, Beymers and Kaelins of the world. I’m calling it The Last Chance Channel, and it’s strictly for the back alleys of Beverly Hills. Relative luminaries like Stephen Baldwin, Pauly Shore and The Situation are too big for this room.

To anyone who’s ever Googled the likes of Ms. Cates, Mssrs. Beymer, Kaelin, or the countless other one- or two-hit wonders who barely qualify for a “Where Are They Now?” feature in your Sunday-paper magazine, this channel’s for you. Call or write your local cable or satellite company and insist they make room for The Last Chance Channel.

William Katt and Judge Reinhold will owe you big-time.