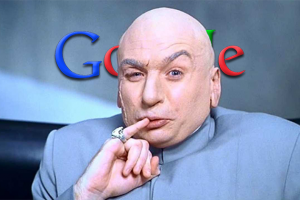 The battle between Google (“Don’t Be Evil”) and Apple (headed by Dr. Evil) is getting interesting. The latest salvo is Google’s announcement that they are opening their own music store later this year. This, of course, is a shot across Apple’s bow.

In the open-source spirit of Google, I have a suggested logo for their new service. I would never dare this with Apple, because I know they would dispatch armed militia to my home to seize the artwork and haul my ass off to jail.)

The question is, Which of these two will prevail in the long run?

Apple’s viability is completely wrapped up in its ability to continue to innovate. While I’m sure there are many bright people working at Apple, the real brand is Steve Jobs.

Exhibit A: Look what happened at the COMDEX or Macworld or whatever it was during the time that Steve was dealing with his health issues. Not only did the company fail to introduce a cool new product, but the anonymous guy who did the non-introducing was both regrettable and forgettable.

Meanwhile, quick—name Google’s CEO. Even if you can, who cares? Google is gobbling up the best and brightest, giving them a lot of freedom to innovate, and they’re not afraid to throw stuff against the wall to see what sticks.

I fear for Apple’s future when Mr. Jobs is no longer running the show. I have no such fears with Google. The only question is, Will Google turn evil?