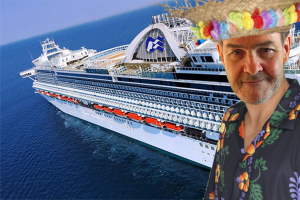 A business group I belong to was giving away a four-day cruise to the member whose video generated the most Facebook “Likes” by the end of the day on September 2.

I put the word out to my loyal Army of One to “Like” the bejezus out of my video, but it was to no avail. Both the first-and second-place winners used shady offshore outfits to buy a bunch of likes.

(My friend and friendly competitor Katie Wagner, who runs a thriving social media business, figured out at the onset that it was all about the Likes and had nothing to do with the quality or content of the video itself. Still, she took the high road, turned in a professionally-produced piece, and generated her likes organically; but she was no match for the Eastern European web-bot that racked up the Likes for the winners.

For my own part, I was in it just to have some fun at Katie’s expense. I invested about five minutes my project, and the results speak for themselves, as you can plainly see: