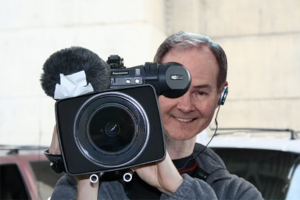 We recently did a video shoot as part of the GoFundMe campaign we are about to launch in support of the pilot stem-cell program I’ll be participating in. This was not one of those take-out-the-smartphone-and-wing-it-for-a-couple-of-minutes deals; this one had a four-man crew, a director, two $50,000 cameras—even a caterer, if you count our friend John whipping up a mean spinach salad. The setting was a Newport Beach beach house, which was a treat in itself.

I hasten to point out that all of this was a volunteer effort on the part of all concerned, for the good of the cause. I don’t want you to get the idea that we spent thousands of dollars on a video designed to help raise, well, thousands of dollars.

The first day of shooting was “a day at the beach with Jay and Sharon.” The director had us walk up and down the pier, doing several phony things—looking through one of those coin-operated viewing gizmos (we didn’t see anything because we didn’t have the budget to actually insert a real coin into the slot) and gesturing to one another about what we were phony-seeing through the gizmo; pointing out in the water, so the filmmakers could intercut some footage of a whale that they shot earlier in the day; pointing up in the sky, so they could intercut some footage of a helicopter that they shot the day before. I could almost imagine myself in a big-budget CG production where I was acting against a dinosaur or something. Total time on the set: six hours.

The second day of shooting took place inside the beach house, where I was plopped on a couch and fed questions to be answered on camera. They also shot me doing what for normal humans would be routine everyday tasks, like parking a car, climbing the stairs, and putting on socks. Total time on the set: seven hours.

Here’s how it breaks down: out of the 13 hours I spent with these people, they shot about five hours of footage. (It’s all digital, so I don’t know if the word “footage” applies, but I’m just learning the ropes here.) Out of the five hours of footage, the final cut (see, I’m really getting to know the lingo) is three minutes and change.

All in all, it was great good fun being “talent.” In radio, “talent” is the guy or woman who schleps into the studio five minutes before the shift begins, and is lucky to go the entire shift without being chewed out by the program director for some format infraction. “On location” means doing a remote broadcast from a dingy gas station.

According to my friend Katie Wagner, now a social-media expert but back in the day an anchor for CNN, in television the word “talent” begins to take on some cachet. Even within the station, television personalities are regarded as stars. When they are out and about, they are recognized and accorded a certain amount of deference. Radio people, on the other hand, can pass through life largely unnoticed.

So I enjoyed my 13 hours in the sun, where people would fluff my hair (I think hair-fluffers belong to the stagehands union, but I’m not sure), tell me where to sit and stand, and incessantly ask me if I wanted anything.

I did discover, however, that people who do this for a living earn every penny. There is an extraordinary amount of time spent just sitting around, while the camera and lighting people get everything just so. There were a lot of retakes, not because I lacked the performance skills—I’m relatively awesome in that department—but because they wanted different inflections, different facial expressions, different camera positions.

I also gained an enormous amount of respect and appreciation for the skills that go into even a three-minute video—or a one-minute commercial, for that matter. Sometimes it isn’t obvious, but there is a big difference between that phone-camera selfie and the real deal. I am indebted to Laura, the coordinator and director, and “Clay from the Bay” and his crew, for showing me what quality video is all about. And, as always, I don’t have enough gratitude to thank properly my friend John for coordinating the whole thing—not to mention that mean spinach salad.

You can see the fruits of our labors here.

Just Shoot Me by Jay Mitchell is licensed under a Creative Commons Attribution-NoDerivatives 4.0 International License.