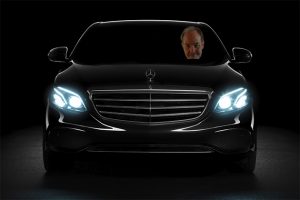 As a lifelong broadcaster, I’ve always tried to make the commercials I write and produce, well, well-written and well-produced. I’m proud of what I have accomplished, considering that my budget is usually the lint I could scrape from my pockets and the change I could fish out of the couch.

That’s what makes the current crop of commercials for Mercedes automobiles particularly galling. If anyone should have the budget to get the best writers, it would be they. Instead, the spots sound like they were written by the most junior copywriter’s idiot brother-in-law.

Consider, if you will, Exhibits A and B, from two of the recent commercials Mercedes ran during the U.S. Open tennis tournament:

With this level of engineering, it’s a performance machine. With this degree of intelligence, it’s a supercomputer. With this grade of protection, it’s a fortress. And with this standard of luxury, it’s an oasis. Introducing the completely redesigned E-Class. It’s everything you need it to be – and more. Mercedes Benz. The best or nothing.

“Hanging on for Dear Life”

What is driving performance? It’s not a weekend hobby. You have to live and breathe it for 50 years. It’s the sound and the fury. It’s letting it all hang out. And it’s hanging on – for dear life. That is what AMG driving performance means. And this is where it lives. The 503 horsepower Mercedes AMG C63 S Coupe.

Give me a high-performance break. That’s probably the worst, most cliché-ridden commercial writing since “Coke is it.” The spots would have been immeasurably improved if they just ran car sounds for 30 seconds.

And what about that slogan: “The best, or nothing”? What kind of choice is that? “Okay, Mercedes, you get your way. You’re the best. Now stop holding your breath.”

These commercials – and, unfortunately, countless others plaguing the airwaves nowadays – prove two points:

If only there were some television awards, similar to the Radio-Mercury awards, recognizing excellence in creative output.

Oh, wait — there are: The CLIOs. And the Addies. And the Television Academy. And the Emmys. And a bunch more.

Memo to Mercedes: Save the entrance fees. You may think your cars are the best, but your commercials are nothing.