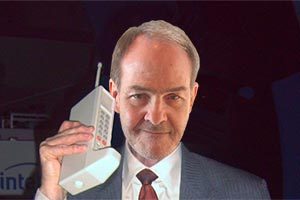 When you’re a kid, your grandmother is all-knowing. I remember to this day her timeless wisdom on what seemed to be an inexhaustible supply of subjects. (Of course, when you compare grandmother-wisdom notes with your friends as an adult, you realize that most of the advice grandmothers dispense comes from a common database.)

I can still hear my grandmother say, “A stitch in time saves nine.” What the hell is that supposed to mean? Have you ever tried to stitch time? Nine what?

But the grandmotherly advice petered out over time, and I found myself wondering where Grandma was when I really needed her. It would’ve been nice, for example, if she had told me, “Never mix, never worry,” or “No glove, no love,” or “Don’t ever subject your cell phone to moisture.”

In the light of recent events, it sure would’ve been nice if Grandma had given me that last bit of advice. Of course, in order to do so, cell phones would have had to have been a thing when she was still around. I don’t think they’d even come out with those clunky brick things before Grandma shuffled off this mortal coil. Even still, grandmothers are supposed to know everything, so predicting the advent of the ubiquitous communications device a couple of years in advance should not have been too much to ask.

Now about those recent events. A few days ago, I did indeed subject my cell phone to moisture. Although my grandmother never warned me about such things, Verizon certainly did, in big red letters – and their warnings didn’t go nearly far enough.

After the aforementioned faux pas, the first thing I did was follow the advice of my tech whiz friend Malachi — I put my cell phone in a baggie with a bunch of rice to try to dry it out.

Alas, the home remedy proved unsuccessful. The good news was, the phone was not completely dead. But it began to display some peculiar behavior. For example, Siri insisted upon calling me “Chester,” despite repeatedly being told otherwise. (I must say it was kind of endearing, though, because she would follow the name with a cute little giggle.)

And all of a sudden, Siri responded to requests with random show tunes, belted out in a spot-on impersonation of Ethel Merman. (Her rendition of “Everything’s Coming up Roses” was particularly stirring.)

No matter what destination you specified, Siri would give you directions to a defunct dress shop in Lakewood, Ohio. And whenever you tried to depart from her route guidance, she would just tell you to “make a legal U-turn” over and over; to get her to stop, I tried a bunch of things, and eventually found a phrase that did the trick: “Ich bin ein Berliner.”

Sometimes, when you would ask Siri something, she would snap “That’s none of your frigging business.” Other times, she would say, in her best HAL 9000 voice, “I’m sorry, I can’t do that, Chester.”

As useless as the unit was, I couldn’t turn it off. Every time I reached for the power button, Siri would say, “Bad move, Chester. If anything happens to me, an email with every embarrassing thing you’ve ever done in your life goes to the National Inquirer.”

Finally, reckoning that the resale value of the phone was around $0 anyway, I stuck it back in the liquid that caused all the problems in the first place. After a few “glub, glub” sounds, the phone finally gave up the ghost.

I wish Grandma – or Verizon, for that matter – had told me that it was a particularly bad idea to drop the phone into vodka.

I also wish I’d had the presence of mind to capture Siri’s antics; they most certainly would have gone viral. But then, what was I going to capture them with? The one time I tried to use the camera in the phone, what I got back were scenes from Battlefield Earth, complete with voiceover commentary from Siri. In German.