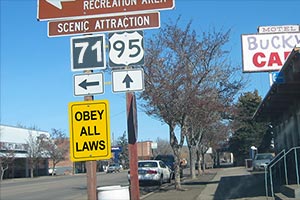 I saw a road sign the other day that got me to thinking: “Obey All Laws.”

Second, when you think about it, that is a tremendous responsibility to give an ordinary citizen. After all, there are so many laws, and if we have to obey all of them, that could be extremely time-consuming.

Thankfully, most laws tell you what not to do. Okay, won’t do them. Check. That means in Alabama I need to be sure I don’t impersonate a member of the clergy; in Texas I dare not pee on the Alamo; and in Southington, CT, tempted as I might be, I need to refrain from using silly string in public.

It’s the ones that tell you what you need to do that are worrisome. For example, in Arizona I need to get a permit to feed garbage to a pig. Now, while I don’t foresee doing so, I probably should go ahead and get that permit just in case. Ditto if I want to off a pigeon in North Dakota. Again, you just never know.

All this gives rise to a thorny philosophical dilemma: is not disobeying a law the same as obeying the law? This can open up a real can of worms—by the way, opening a can of worms is illegal in New Jersey, and I think we all know why—when, for example, you find yourself in Wyoming, where you can be fined a bunch of Franklins for forgetting to close a fence gate behind you. In order not to disobey that law, I guess you have to go find a fence, go inside, and remember to close the gate behind you

Of course, in the course of obeying that law you will be disobeying the law against trespassing, which you emphatically don’t want to do in a state with a shotgun-per-capita ratio of about 36:1.

Then I got to thinking about enforcement. There is such a thing as “selective enforcement”—like when you get pulled over for doing 75 in a 60 zone, and everybody else in the pack goes scot-free. I would think that most laws, certainly including the bizarre ones cited above (which are all real, by the way), would not be applied unless The Law got a complaint from somebody.

First, I would track that somebody down and invoke a world of hurt.

Second, got it. Don’t do illegal stuff in front of witnesses. Good tip.