Life in the Big House 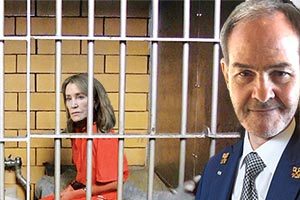 The Desperate Diary of Felicity Huffman

Well, the judge just threw the book at me. Fourteen days in the slammer. (I believe my fellow cons call that “hard time.”)

My attorneys, and more important, my psychic advisor, told me to prepare mentally for my ordeal. Fortunately, I’ve already done that, because I was up for the Morgan Freeman part in The Shawshank Redemption. (Morgan and I are good friends, which, in Hollywood, means I ran into him at some award ceremony or soup kitchen, but I couldn’t pick him out of a lineup.)

And the only reason I didn’t get the part was something about “men’s prison,” but that was the 1990s, for God’s sake; they could have written around that if they wanted to.

Anyway, I overheard somebody talking about the prison as being “the Big House.” That I can relate to. I wonder how big the pool is?

I can’t help thinking that all this is much ado about nothing. (Come to think of it, I was up for a part in that play. They offered me Beatrice, but I was holding out for Don Pedro. The only reason I didn’t get the part was something about “illegitimate brothers,” but that was the 1590s, for God’s sake; they could have written around that if they wanted to.)

Anyway, I think they are making too much of all this. After all, I was just trying to give my daughter a little bit of a leg up on the competition. (In Hollywood, “daughter” means somebody I’m related to in some way, I think, but I couldn’t pick her out of a lineup. Remind me to ask one of the nannies what her name is.)

Somebody smuggled me a picture of one of the rooms in the Big House. (Actually, somebody just gave it to me, but doesn’t “smuggled” sound way more dramatic?)

Anyway, the room must be a shoe closet, because it’s very small and it’s got bars around it. Can’t be too protective of your shoes, I guess. And there seems to be some sort of a cot in the room, I’m guessing so the valet can lie down every once in a while. Thoughtful touch. Remind me to put a cot in one of my shoe closets at home.

I just saw the wardrobe for my prison stay. Orange is not exactly my color, but I can work with it. Remind me to see how fast Giorgio can run up a few numbers for me. After all, I’ll be there for two whole weeks, which means I’m going to need maybe a couple of dozen outfits. (This is supposed to be “punishment,” after all, so the least I can do is keep my wardrobe changes down to a bare minimum.)

Just met with my psychic advisor and my new prison consultant, a very nice gentleman named Rocky. Too much ink for my taste, but otherwise he seems like a decent guy. (He was actually recommended to me by my former financial advisor, who met Rocky while doing a stretch for embezzling.)

Anyway, Rocky straightened me out on a couple things. It turns out, for example, that they expect me to actually live in the shoe closet. On the cot. Taking a crap in front of God and everybody. Not only that, but they have a lock on the shoe closet door, so I can’t go in and out as I please. (Rocky tells me that is where the term “lockup” comes from.)

Rocky told me that my activities would be supervised by a “guard,” which, I guess, is like a concierge. As long as he can get me some Maui Wowie, I’ll be good to go.

The bright spot, apparently, is that they let you out of the shoe closet for meals and exercise. That sounds a lot better. I have to remember to ask, Do they provide transportation to Spago, or do I have to get an Uber? Does a side-trip to Pinkberry count as a separate meal? And as far as exercise goes, do they provide the personal trainer or do I bring my own?

Well, the big day is tomorrow. I begin serving my sentence. Surprise plot twist: my lawyers were able to negotiate a deal for me so I don’t have to stay in actual prison. (It turns out that not only would I be staying in the shoe closet, but I would be wearing essentially the same outfit for two weeks straight. Who does that?)

Anyway, my legal team tried real hard to convince the judge that staying under house arrest at the Beverly Hills Hotel would be fitting punishment, but apparently the judge stayed there once and has something against it, so the best we could do was something called “Motel 6.” In a place callrd “Van Nuys.” I don’t know anything about that hotel, but I’m assuming the suites are nice.

There must be some kind of mistake. They checked me into the Motel 6, fitted me with an ankle bracelet, and left me to my own devices. The good news is, I get to wear my own clothes.

The bad news is, now that I’ve seen the room — not a suite, mind you, not even close — that shoe closet in the Big House is looking pretty good right about now.

Life in the Big House by Jay Mitchell is licensed under a Creative Commons Attribution-NoDerivatives 4.0 International License.