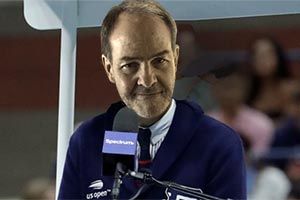 I have a big confession to make: In general, sports of all kinds leave me cold. Football, baseball, golf, the Olympics – I could not care less. However, acknowledging that sports is the lingua franca of the American male, I make it my business to know just enough to get a conversation going, after which I just shut up and let the other person talk.

I know, for example, that everybody is going to be talking about the Super Bowl, so I make it my business to find out three things about the big game: who played in it, who won, and how close it was (indicating, also, how exciting it was). To pass for an enthusiast, all I have to do is arrange that information into a sentence and shut up: “Man, that was [an exciting/a boring] game, wasn’t it?” Or, “I can’t believe how [close/lopsided] that game was.” You get the idea.

But there is one sport that I do follow and about which I have at least a modicum of enthusiasm: tennis. I don’t know why that one sport has captivated me since I was a kid. Sure, my parents played it, but they also played golf, and, judging from the life-shortening effects of that sport, I am thankful that I avoided its perverse allure. (But I must admit I’m a little fascinated by the fact that golf is the only sport, other than bumper cars, where you get to drive around in tiny vehicles without a license – kind of like if you didn’t need to pass a test to drive a Fiat.)

Maybe what I like about tennis is that it combines a number of features that appeal to my borderline OCD:

One thing that emphatically does not appeal to me is the scoring system. There is no mathematical progression on earth that goes “15-30-40.” And what is this “love” business? Only in the game of tennis and Taylor Swift songs does love mean nothing. (There have been attempts to use a more logical scoring system – like “0-1-2-3” – but it has never caught on. Maybe the omnipotent Ms. Swift, who would see record sales plummet if love actually meant something, nixed the idea.)

Part of what comes with the human condition, which certainly does not appeal to my borderline OCD, is that things in life are not always logical and orderly – like my affection for tennis. But my affection for tennis has created a major problem for the game: I am pretty well convinced that when I put my attention on a particular player, that player tends to lose. And I’m not talking about the number 7000 seed, either. I’m talking about the greats of whatever era you want to talk about: John and Jimmy; Pete and Andre; Steffi and Chrissy; Raffa and Roger; Serena and, well, anybody. Whenever I am watching a game in which one of these champions participates, said champion falls completely apart.

Actually, this phenomenon is not restricted to tennis. If I accidentally find myself watching the tail end of some sporting event while I am waiting for the next program to come on, I can similarly affect the outcome. Tiger Woods’s fall from grace? My fault. The 2001 Rams Super Bowl bloodbath? On me. The 2006 Tigers World Series drubbing? Guilty as charged.

But, since I deliberately watch the game, my “gift” is particularly damaging to tennis. During the most recent US Open, I decided to test my thesis. I had a game on in the background – it happened to be the Day 6 matchup between Nadal and Chung, a perfect test case because Nadal was favored to win by a factor matched only by the federal budget or the temperature of the sun – but mostly my attention was on an important project on my computer (Solitaire or Sudoku, I can’t remember which).

As I was wailing away on the computer, I could hear in the background that Raffa was handily winning point after point, game after game. But whenever I turned to look at the screen, Nadal would blow it. Badly. Although the talented Spaniard (ranked Number 2 in the world) ended up winning the match in straight sets, the hapless Korean (Number 170) did make it onto the scoreboard from time to time, for which I will take full credit.

But I think they’re on to me. I have noticed inexplicable cable service interruptions, and even power outages affecting the entire grid, during matches that I watch. If I turn on a game, my favorite player suddenly develops bone spurs.

Who knows? For the first time in history, somebody who doesn’t play, or even watch, a sport becomes the highest-paid person in that sport. Take that, Taylor.