Nice Work If You Can Avoid It 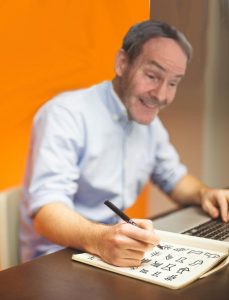 The other day I was futzing around with the online version of QuickBooks and I decided I wanted to update the design of my invoice. (I’m sure there’s some evidence somewhere that a really nifty-looking invoice makes people want to pay you faster, and maybe even throw in a little something something because your invoice looks so cool.)

I was going to use my logo, but the latest one I have was designed during a past life in Mesopotamia, when I was taking a break from inventing the wheel (yes, I was that Yamquzzuhalamma). It also turns out that cuneiforms are nearly impossible to print out.

So in order to update my invoice I needed to create a new logo. That only took about three hours, which is broken down in the following pie chart:

Okay, mission accomplished. I had my logo. But I realized that my business cards and stationery needed a makeover also. After all, my last stationery system was printed on papyrus, and rumor has it that you can no longer buy reams of papyrus down at your local Staples.

So I spent another three or four hours designing my business card and stationery. And another hour or so arranging to have them printed.

Just as I was logging on to QuickBooks to update my invoice, I realized that my website needed to be redesigned to match my new logo. (The copyright date on my website is in the 1800s, so I figured it was probably a good idea to update things. After all, a lot has happened since the advent of the Twentieth Century. A lot.)

Fortunately, I am a skilled web designer, so it only took me about 10 hours to get everything just so. Okay, now, after a mere 17 hours, we have a new logo and a new website. But meanwhile, real work – for which I am being paid, ostensibly, if I could just get the damn invoices redesigned – has been piling up at my door, so I have to attend to that before I get to the invoicing.

But first, I have to finish up this essay. And come up with the graphics. That should be good for another two or three hours.

Meanwhile, my wife is complaining that she doesn’t have enough money to buy a second outfit. I wonder if there’s a correlation there somewhere.

You can see my new logo on my new website, JayMitchell.com. It’s just too bad the awesome-o-meter doesn’t go to 11.

Nice Work If You Can Avoid It by Jay Mitchell is licensed under a Creative Commons Attribution-NoDerivatives 4.0 International License.