Portrait of the Artist

Something very cool just happened, and it wouldn’t have if I had continued to hide my physical foibles from the world.

My friend Laura and I were brainstorming titles to give the campaign on which we’re about to embark – details to follow – and we agreed that the phrase “Stamp out …” was suitably punchy. For some reason, the image that sprang to mind was the iconic “Keep On Truckin’” character created and popularized by the artist R. Crumb.

Being in a what-the-hell mood, I Googled Mr. Crumb and found him to be alive and well on the Internet, whereupon I sent the curator of his website, one Alexander Wood, the following email:

I am suffering from a rare neuromuscular disorder and a group of us are mounting a GoFundMe campaign to allow us to take advantage of experimental treatments not covered by insurance.

Okay, but what does that have to do with you or Mr. Crumb?

A couple of us were brainstorming a theme for our campaign and we came up with “Stamp Out [whatever].” I’m not sure why – maybe it was a flashback – but Mr. Crumb’s iconic “Keep on Truckin'” character came to mind … in some poses, it looks like he might be stamping something out with his foot.

So here’s the question: would you guys consider letting us use the character in this context – on a couple of websites, maybe some emails – with full credit and lavish appreciation?

Attached is a rough draft of what we have in mind.

It never hurts to ask, right? 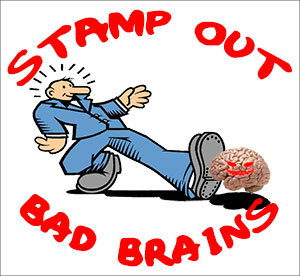 What I sent Mr. Crumb

After a few days I figured that either the missive had been caught in his spam filter or that he was far too busy to deal with the likes of me. Imagine, then, my surprise when the following landed on my virtual door step not long after:

Your letter to Alex Wood asking about using the “Keep On Truckin’” image in your “GoFundMe” campaign was forwarded to me.  Permission granted to use the image if you want, free of charge.  Thanks for asking.  But are you sure you really want to use the image the way you show it in the sample graphic you sent, the truckin’ guy about to step on a human brain??  I leave it to your discretion, but I’m not so sure this is a great idea. But then, I’m not suffering from a rare neuromuscular disorder, so I dunno. I leave it up to you. 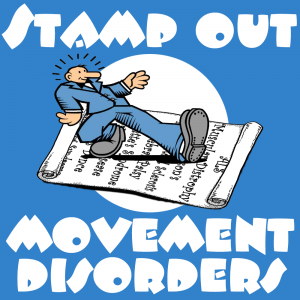 This is the final version (so far)

My email in reply pretty much sums up my reaction:

Thank you for your generous offer. As a longtime fan, I am honored that you took the time to write, to grant approval, and offer your thoughts.

You are absolutely right about the image. It was done in haste, and we’ll find a much better depiction of what we hope to stamp out — or use “Truckin'” guy more in the spirit of perseverance that he truly represents.

I hope you’ll forgive me, then, for closing this message with,

Anyone who lived through the Sixties – and remembered it – can relate to getting the attention of the estimable Mr. Crumb. (It’s kind of like having Mick Jagger drop by to jam with you – albeit with a very different bunch of drugs.)

What? You’ve never heard of R. Crumb? Google him yourself and get back to me. And don’t harsh my mellow.

Portrait of the Artist by Jay Mitchell is licensed under a Creative Commons Attribution-NoDerivatives 4.0 International License.