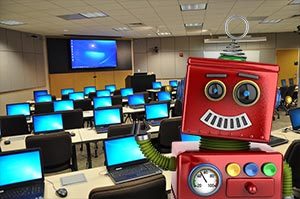 As regular readers to this nonsense already know – and if you are not a regular reader, eat more fiber – I have the use of 50% fewer hands and arms than the normal human being. As such, I find it convenient to use dictation software, and apparently the gold standard is Dragon Naturally Speaking – but if that’s the gold standard, we are living in the tin age.

Anyway, there are certain features about the software that prompt me either to laugh my ass off or tear my hair out.

For one thing, there is definitely artificial intelligence at work – not the warm-fuzzy-CHiP-robot-dog variety, but rather the Judgement-Day-killing-machines-that-hunt-you-down-and-kill-you type. The software somehow senses when you want to use it and resolutely refuses to take down anything you say. On the other hand, when you don’t want to use it – whether you put it to sleep (not as bad as it sounds; you’re just sending it to a farm upstate where it can romp and play with other software), turn it off completely, or exit the program entirely, it doesn’t seem to matter – it will all of a sudden come to life and cheerily begin recording everything you say (or what it thinks you said).

The other day I was conversing with a friend of mine on the telephone and, some time after I’d turned the thing well and truly off, Dragon suddenly came to life and began to write its version of the phone conversation. To wit:

Check it out just so that based you you you would be saying this you are talking up your podcast blog that’s the way you could frame it is to say,, rather than listen to my pride you know I will have to have lots of but if you say oh I’m so so the above since his first you say you are this week at the Milligan interest you because it has to do with you selling Brooklyn Bridge or something like that may or may not but you have tied it up you you you tie it down shows that you made it you think it’s convincing them now here’s what I thought of also is and you probably used as a about it to say I would really appreciate your what you know the I’m serious about this, just saying it but I really would like to follow up with you and you get your thoughts about how I can do it people love that is another years and another thoughtful.

At least now I know how the Dr. Bronner’s label came to be.