The Brain Drain I: Dealing with Debilitation 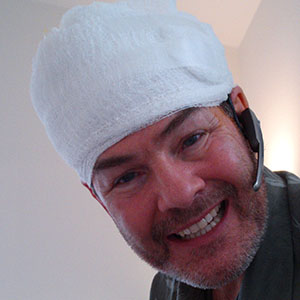 It’s been about seven years since I was diagnosed – initially – with Parkinson’s. Now, in the last few weeks, some rather significant events have occurred that could mean a lot to me and my family, but more than that, to the millions of people throughout the world who have some form of neurological disorder.

I don’t talk or write about this too much, because I don’t want to be defined by this condition, and because I don’t need a handicap – in the other sense of the word – in the business world, where I am active and compete every day. But, because this is an anniversary of a sort, and because of the extraordinary path I’ve been placed upon, it seems just and fitting to begin to chronicle the course of what I hope to be a comedy in three acts.

First, let’s talk about that “diagnosed initially” business. To begin at the beginning, in the first part of the year 2008, I began to notice some stiffness and limited range of motion in my right arm. After several sessions with my chiropractor failed to produce improvement, she suggested that I visit an orthopedic surgeon, thinking the problem might have been in my back. The orthopedic surgeon, as is their tendency, found some things in my x-ray that, he thought, could be corrected by surgery. But, at the last minute, he suggested that I consult with a neurologist just to be sure.

The neurologist had me walk around, wiggle my fingers and toes, follow his finger, and goodness knows what else – and said to me, flatly, “You have Parkinson’s.” He went on to explain that I had a very rare case, shared by only about 5% of all Parkinson’s patients, where there are no tremors. He promptly put me on the “gold standard” drug for the disease, Levodopa, which is so potent that frequent kidney analyses are required, and the side effects, especially over time, can kill you.

After a few weeks of Levodoping, it was apparent that the drug was not having any effect. At that point, the neurologist suggested brain surgery to implant electrodes that would stimulate the production of the missing ingredient, dopamine, which was causing all the problems in the first place.

Being a good little soldier, I underwent the brain surgery. (That is a story in itself.) But it, too, turned out to be ineffective.

At that point, the neurologist declared that I did not in fact have Parkinson’s, but rather a condition called Primary Lateral Sclerosis, or PLS. PLS is like a second cousin to Parkinson’s – essentially the same cause, with a different effect. That, coincidentally, is the exact point when I realized that the medical community (A) doesn’t feel comfortable unless everything has a name, and (B) had no idea what I had or how to treat it.

In the ensuing years, I gradually lost all functioning in my right arm – it hangs limp at my side, dead weight – moving my right leg is an effort; I have “drop foot” on my right foot, necessitating the use of an ankle-foot orthotic (AFO – everything in the medical community has not only a name but also initials); my left leg is stiffer than usual; I walk with a cane or, for long distances, ride in a scooter; my sleep patterns are all screwed up; I can’t sit upright for long stretches of time, and standing is even more difficult; my balance is shot; I frequently experience lower back pain because of the way I walk; I experience pain in my upper right shoulder pretty much all the time because of the weight of the right arm; and I fatigue easily.

I see the neurologist twice a year for a perfunctory five minute fly-by, but there is nothing he can do for me other than chart the progress of the disease. In his world, what I have cannot be treated, medicated, or cured.

Being a rather non-self-aware fellow – typical of guys, I’m told – I don’t dwell on what I cannot do, and more on what I can do. This confessional is uncomfortable for me, because I don’t particularly enjoy listing my defects, and I have no control over how you, dear reader and friend, will respond to all of this.

I have not, and probably never will, become comfortable with people spontaneously offering assistance to me. However, I have learned to be gracious when such assistance is offered, even though I would much rather do it myself, even if it takes two or three times longer. (There are times when the assistance can be downright dangerous. For example, if I am opening a door for myself, I am calculating the resistance and what force will be required for me to open it. If someone opens it for me, since my balance is off and I cannot easily make course corrections, I could very well go careening out the door and onto the ground.)

My interaction with the world has become an exercise in physics, and I’m okay with that. For one thing, I have gained an appreciation of what is required to do what others take for granted: putting on socks… Buttoning a shirt… Going up and down stairs… Working on a computer.

Okay, enough. You get the idea. In my next post, I’ll give you the second act of this little drama, and the promise of a happy ending.

The Brain Drain I: Dealing with Debilitation by Jay Mitchell is licensed under a Creative Commons Attribution-NoDerivatives 4.0 International License.