There isn’t another award like it, so I decided to create my own: the “Mitchies” recognize the people and things I personally like or dislike. There is no academy. No politicking. No voting. And best of all, no overblown, boring, terminally irrelevant awards ceremony.

An important note regarding our Mitchies statuette: Several people have told me it reminds them of the Oscar award, but let me hasten to say that our Mitchie is not in any way related to the Oscar. For one thing, our statuette is green; theirs is gold. For another, the Mitchie sports sunglasses; not so the Oscar. So, Academy of Motion Picture Arts and Sciences, move along, there’s nothing here to concern you.

And now, for your consideration, the 2015 Mitchie Awards go to …

BEST USE OF JAMES SPADER EVER: The Blacklist simply would not work without Spader. He has the rare gift of displaying a personality that is extremely complex, an unpredictable mixture of bad and good, which is always fascinating and never repulsive. 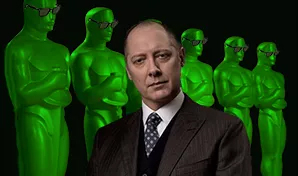 “THIS IS MY EXCITED FACE”

BEST USE OF ELTON JOHN’S “ROCKET MAN” EVER: The final scene of the season-ending episode of The Blacklist reflected the haunting, hollow-but-hopeful tone of the song. The tight shot of Spader’s Reddington and Megan Boone’s Keen riding off into the uncertain sunset was some of the best acting on television ever – no dialogue, just subtle expressions that said it all.

WORST USE OF JAMES SPADER EVER: Ironically, The Avengers: The Age of Ultron would not have worked nearly as well without Spader voicing the role of the eponymous super villain, but as a Blacklist fanatic, I just kept hearing Red Reddington, but without the “good” part – just pure evil. Spader’s performance saved what was otherwise a bad dress rehearsal, but it didn’t help his Blacklist work.

BEST EXIT LINE EVER: James Spader – again! – took this one hands down with his final line before getting his just desserts at the end of the Avengers movie: “Oh, for God’s sake.” A brilliant line, brilliantly delivered.

But lest you think the Mitchies are about Mr. Spader exclusively, we offer our last two categories:

MOST DISAPPOINTING SIGN-OFF: David Letterman, for a distinctly flat and unemotional turn on his final night. His monologues haven’t been really funny in years, drawing respectful, dutiful applause but very few laughs.

Dave would have been well served following the example of his mentor and hero, Johnny Carson. I pulled out the DVD of his final night on the air – so unaccustomed to working with that medium that I mistook the VCR player, also gathering dust, for the DVD; good thing I didn’t try to feed the DVD into the VCR slot – and, as I remembered, Carson epitomized class and grace — besides being very funny.

Even 23 years later, his monologue was a riot … and throughout the show, Carson exhibited a controlled, classy emotionalism that hit just the right note. David Letterman is without question a comedy genius who has made an indelible mark, but his natural reclusiveness prevented him from going out with style.

WORST MISUSE OF A QUESTIONABLE TERM IN A TV COMMERCIAL: The “Go Commando” campaign by whatever bathroom tissue brand — even if I remembered I wouldn’t mention the company — is possibly the best example of how colossally bad ideas get green-lighted in contemporary advertising history. I’m not going to elaborate, because that would play into the hands of these clowns. We’ll be doing the ad biz a big favor by boycotting the company behind this travesty. Now I wish I could remember what it is.

The Feeble Choice Awards by Jay Mitchell is licensed under a Creative Commons Attribution-NoDerivatives 4.0 International License.