The Gift that Keeps on Giving 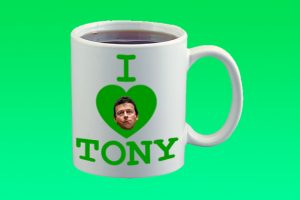 A few days ago I received a nice gift from my friends Stuart Sharpe and Shayna Sharpe at Regional Reps: a coffee mug.

Now before you conclude that devoting a blog post to somebody giving me a promotional mug is a waste of precious Internet resources, let me explain. (By the way, it is predicted that the Internet will be swallowed by the sun in a mere 2 million years. Consider yourself warned.)

First, the mug was sent via U.S. mail in a box with no packing material whatsoever, and yet it arrived unscathed. I have sent indestructible lead weights via U.S. mail, with bubble-wrap, peanuts and boxes within boxes, and they still managed to break in transit.

Second, the mug could not have been more timely: my old “I Heart Tony Hayward” mug inexplicably developed a leak about three and a half months ago.

It still hasn’t been fixed.

The Gift that Keeps on Giving by Jay Mitchell is licensed under a Creative Commons Attribution-NoDerivatives 4.0 International License.