The New Math Path to Riches 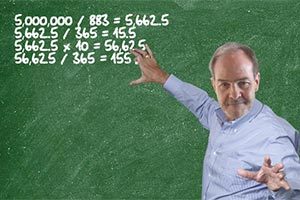 Just after my last post, I was going through this blog, basking in the glory of the awesome creativity displayed herein – which in itself is further evidence of the dementia of which Sharon has accused me almost since the first day of our relationship – and I stumbled upon the number of subscribers that we have accumulated over the years: 883!

That means, for whatever reason, there are 882 other people who are willing to go along with this nonsense. (Even my wife and what few friends I have left have refused to cooperate.) Inasmuch as I have done zero promotion, it is astounding to me that at least 882 people have stumbled upon my meager efforts, much less have actually signed up for the abuse to which I subject them.

So 883 subscribers have got to be worth something, right? That’s got to be close to “viral,” which apparently is the Holy Grail of blogging (and cat videos). And, if the rumors are to be believed, “viral” equals big money.

So I did a little bit of research – which nowadays consists of entering search terms into Google and hoping for the best – and found that a posting is considered “viral” when it gets 5 million views.

So I’m a little taken aback. But all is not lost: each of us 883 subscribers just needs to get the word out to friends and family, and we can get ‘er done.

I did a little math – which nowadays consists of asking Siri to do it for me – and it turns out that every subscriber needs to convince a mere 5,662.5 of their family and closest friends (okay, maybe we’ll have to dig into our acquaintances as well), and we’ll get the job done. (I already know where I am going to get the half of a subscriber: [insert brother-in-law joke here].)

Come on Team Jay, we can do this! If each of us commits to getting one new subscriber every day, we can achieve our goal in less than 16 years!

I teach goal-setting in my real job, so I know it’s important to break down a big goal into bite-size chunks. So let’s do the math:

For the sake of argument, let’s say that one person in every 10 you approach will sign up. So all you have to do is approach 10 people every day, which means that you’ll need to ask 877,690 people to sign up over the course of the next 15½ years. (See how easy and attainable it seems now?)

Don’t just sit there. Get busy! I promise that if you do your part, I’ll send you a Starbucks card when we reach our goal.

Wait another minute; by the year 2033, postage will probably cost 10 or 15 bucks – assuming there is still such a thing as snail mail. Okay, so maybe you’ll get a thank-you email.

We yet another minute – now that the FCC has thrown out Net Neutrality (don’t get me started), I wouldn’t be surprised if it costs a few bucks just to send a lousy email.

So let this blog post serve as both a motivating call to action and a heartfelt thank-you for taking that action. Maybe I’ll enter you into a drawing to win a movie ticket or something.

The New Math Path to Riches by Jay Mitchell is licensed under a Creative Commons Attribution-NoDerivatives 4.0 International License.