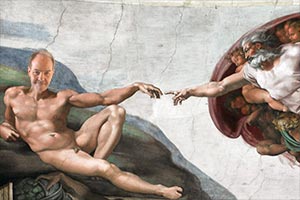 I got to thinking the other day about the universe and stuff. (The aforesaid thinking might have had something to do with medical marijuana – I think the “doctor” diagnosed me with “bees knees,” whatever they are. I’ll tell you this, with the legal weed, I don’t feel my real knees, much less the bee ones.)

Anyway, as I said, I started thinking about the universe and how it was possibly created. What occurred to me was no way that the entire universe could ever possibly be a construct made up by humans. I mean, what person in his or her right mind would come up with insects? Or those scary creatures that live about 20 miles below the surface of the sea? Or toxic mold?

Because I am an organized person – last weekend I spent alphabetizing everything I own – I jotted down a comparison of the universe as we know it and the one mankind would have come up with:

As We Know It

If Humans Did It

Birds
Bees (because I heard somewhere that bees have something to do with flowers, and we all like flowers)
Flowers (see above)
Dogs
Cats
Newman-O’s
Ben & Jerry’s
Some People (I think we all know a few who wouldn’t make the list)

I ran my concept past a guy I know who took a biology course in high school, and he pointed out to me that, as it turns out, most of the stuff in the universe that I would leave off the list is kind of important to keeping things going. (Which I took to mean “no insects, no Ben & Jerry’s.”)

So, as it turns out, it’s a good thing we’re not in charge of the universe. Life without Ben & Jerry’s is simply unimaginable.