You Build It. I’ll break it. 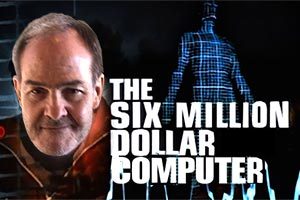 Dell is a wonderful company. Oh sure, their laptops suck. But, like the fellow who keeps beating his head against the wall because he knows how good it feels to quit, I keep buying Dell laptops, knowing the odds of getting one that doesn’t blow up in six months are equivalent to being mugged by Betty White. Twice. In the same day.

Instead, you usually get a fellow (yes, alas, they are usually fellows) who sounds like he’s straight out of a “Bill and Ted’s Excellent Adventure” sequel. (I have long held that certain job categories – food server and support technician being at the top of the list – require only two words, “perfect” and “awesome.” In fact, when I’m at a restaurant, we make a drinking game out of it: Every time the server says either of those two words, we pound back a shot. We are usually under the table by the time the appetizer arrives.)

But I digress. For all the California-surfer-dude veneer, these guys really deliver. They know their stuff, and are able to communicate it in such a way that I don’t have to go scrambling for my English-to-English dictionary. And when you need repairs – remember that “blow up in six months” part? – they dispatch an actual guy to come to your home or office to do what must be done. (In fact, I’ve had some computers when they got to be a year old, pretty much everything in them had been replaced and they started to look eerily like Col. Steve Austin.)

I should note, by the way, that such amazing customer service comes at a cost, but nothing that a third mortgage on your house won’t cover.

But, pardon my French, plus ça change, plus c’est la même chose (which, if I remember my high school French correctly, roughly translates to “keep the change, you’ll need it for the mime”).

It turns out that the most recent computer I bought from Dell, complete with that super-whammy tech support plan, was evidence that reality had started to catch up with the folks in Austin (as in Texas, not as in the Col.). Their “Semper North America” policy is eroding around the edges. If you call during the weekday, well and good; you’ll still get a support technician who is perfectly awesome. But woe unto you if something happens to your computer in the middle of the night on a weekend (which is a virtual certainty – like a smoke alarm battery failing, which causes the damn thing to emit a shriek which is not only impossible to locate but which attracts every dolphin within a 50-mile radius.) At that point you’re back to “patiently waiting” while you are placed “on a brief hold” after the tech has vainly tried to “understand you correctly.”

And you know something? I don’t mind. I don’t have the time. I’m too busy with all the part-time jobs I’m working to pay off that third mortgage.

You Build It. I’ll break it. by Jay Mitchell is licensed under a Creative Commons Attribution-NoDerivatives 4.0 International License.